How to get around in Spain

About-Spain.net - an alternative guide to Spain


Spain - where the travelling is easy


About-Spain.net is partnered with Europe's leading hotel booking portal, Booking.com, to bring you the best online prices
Whether by road, air, rail or by footpath, Spain is a country where travelling is easy; even though distances can be long, Spain's modern travel infrastructure is one of the best in Europe, and travel is generally safe, comfortable, and reasonably rapid.

►For more complete information, see Driving in Spain and  Car hire in Spain.

Spain has an extensive system of motorways, and most of them are free and relatively traffic-free
The Spanish peninsula - comprising Spain and Portugal, is more or less square, and the Spanish capital, Madrid, lies in the middle. Apart from Madrid, most of Spain's major cities lie on or near the coast, at a distance of between 400 and 650 km from the capital, and linked to it by modern motorways. Other motorways run virtually the whole way round the periphery of Spain, along its coasts and round the Portuguese border. Consequently, long-distance driving in Spain is generally easy and rapid.
Traffic can be fairly dense around Madrid, Barcelona and Bilbao, and dense around other cities. The Mediterranean coastal motorway system gets fairly congested in parts at peak holiday travel periods; but apart from these black spots, driving conditions in Spain are not particularly stressful. Away from Madrid, and away from the Mediterranean coast, traffic is usally light, and driving is in most places very easy - whether on motorways (Autopistas or Autovias), the strategic national road network ("N" roads), or on the "autonomous" network, i.e. roads managed by regional authorities.

Buses or coaches are a popular form of long-distance travel in Spain, particularly on routes not served by the high-speed rail network. While there are many companies offering inter-city coach services in Spain, the most extensive network, connecting most cities in Spain, is provided by Alsa, now a subsidiary of the UK's National Express. Coach services in Spain are often faster and cheaper than rail services, except for routes covered by the high-speed rail network.

► Fur more detail see Rail travel and tourism in Spain
Getting round Spain by train can be very fast, or very slow, depending on where you are going. It comes as a surprise to many outside Spain to learn that Spain now has Europe's most extensive network of high-speed rail lines, and the world's second most extensive high-speed network after China. One reason for this is that the country's rail network was, in the late 20th century, in dire need or upgrading. The old network, which still serves many out-of-the-way or remote locations in Spain, remains slow and antiquated... but in many spots rather picturesque.


Scheduled internal services within Spain are run by the national airline Iberia, Spanish low-cost carrier Vueling, but also by Ryanair, Easyjet and others. Most Spanish cities have an airport - notably cities along the Mediterranean coast and the north coast. However in many cases, there are more flights to places outside Spain than to other cities within Spain apart from Madrid, the national hub.

Hiking and cycling in Spain


Spain is a great country for hiking and cycling insofar as the climate is generally dry: Spring and Autumn are the best times of year for serious hiking or cycling trips to Spain, given that the summer months can be - and indeed often are - rather hot. 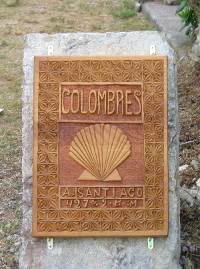 Marker beside one of the trails to Compostella
Spain is home to the heart of what can be described as Europe's oldest network of hiking trails, the pilgrimage routes to Santiago de Compostella. There are routes to Compostella from all over Spain, as well as from France and further afield. Largely forgotten from the 16th to the 20th century, the Compostella pilgrim trails have seen a great upsurge in their popularity since the 1990s, and nowadays each year  tens of thousands of pilgrims or just hikers retrace the steps of their ancestorsalong the dusty and often stony trails leading to Europe's greatest pilgrimage centre, in the far northwest of Spain. For pilgrims and others walking this long trail, there are special hostel-style lodges, called albergues, all along the route, offering very cheap accommodation.
Apart from trails to Santiago, Spain has a network of long-distance marked hiking trails, los senderos de gran recorrido, like France's grande-randonnée routes. The longest of these, the GR7, runs from Andorra in the Pyrenees, to Tarifa, at the southern tip of continental Europe. For more information and a list of long-distance hiking trails in Spain (in Spanish) see the Rutas y viajes website.
For cycle tourism, Spain's network of minor roads offers great opportunities for cycling on well-made roads with very little traffic. In addition, Spain also has hundreds of kilometres of dedicated cycleways, "Vias verdes", most of them following disused railway lines. The Vias verdes website has a map of these routes, and a list, in English. In central Spain, distances are long, and in many cases villages are few and far between. those planning a cycle tour of Spain are advised to remember this.

Photo top of page -  away from the coast and the Madrid area, Spain is a country of empty open roads


Text and photos on this page copyright © About-Spain.net 2008 -2019 except for.
Photo of Spanish branch line by Luis Zamora - licence Creative commons.


About-Spain.net uses cookies for the best user experience. If you are happy with this click or else get more details