About-Spain.net - the alternative guide to Spain

Toledo - quintessentially Spanish
In past centuries, the area now known as Castile La Mancha was part of new Castile, or Castilla la Nueva. This was the great heart of the Spanish peninsula, that stretched from north of Madrid to the northern borders of Andalucia; the area is now divided into the communities of Castile la Mancha and the Madrid region.
This Castile was "new" in reference to Old Castile, further north (now known as Castilla y Leon); the two Castiles were, one after the other, the bastions from which the Catholic Kings of Spain - los Reyes Catolicos - gradually reconquered the Spanish peninsula from the the Moors, a process that lasted almost eight centuries from the battle of Covadonga - probably in AD 722 - to the final expulsion of the Moors from their last bastion in Granada, in 1492.
New Castile was brought back under Christian rule in the year 1085 when King Alfonso VI assumed power over the former Kingdom of Toledo, following a deal with the Moorish king Al-Quadir.

Windmills at Consuegra
Since then, the area that is now Castile la Mancha has come to represent the heart of Spain. This is in part due to the region's most famous - but fictitious - son, the world renowned Don Quixote. In the novel, often regarded as the founding novel of modern European literature, Miguel Cervantes tells the story of Don Quixote de la Mancha, a rather senile country gentleman who sets off on a picaresque mission to recreate the age of chivalry. Among the best known episodes in the novel is the section where Don Quixote picks a fight with windmills, imaging them to be dastardly giants.
While Cervantes did not specify exactly where don Quixote tilted at windmills, Castile la Mancha's windmills have become icons of the region. There is a Don Quixote trail starting from the small town of Orgaz, south of Toledo, which takes in several sites with hilltop windmills, including the most famous of these at Consuegra, where there are still eleven historic windmills for visitors to tilt at. The mills are monuments to the region's traditional economy; this part of the southern Meseta of central Spain has for centuries been a major wheat growing area, and wheat is still the principal agricultural activity in the region today.
The area is also home to large and small flocks of sheep, and has achieved one of Spain's modern agribusiness success stories, by making the local sheep's cheese, just known as Manchego, into a major export product.
Interestingly, Castile la Mancha is also Spain's largest wine producing region, producing over half of the country's wine. The La Mancha DO  ( Denominación de Origen or Geographical appellation) wine region, located mostly in the south of the region, is the largest wine appellation area in the world; but it is not very well known, being well away from most tourist routes. The largest concentration of vineyards is in the province of Ciudad Real. The hot dry conditions prevalent in this part of Spain are ideal for the large-scale production of table wines; but in the last thirty years, more and more of La Mancha's wine producers have been putting quality before quantity, and good wines from la Mancha can now hold their own against many better known names from elsewhere in Spain, and other countries.

Among old Spanish cities, Toledo is one of the many jewels in the crown. The old city stands on a hill in a loop of the river Tagus. The river is crossed by two historic bridges, including the Roman Alcantara bridge, and the old city is partly surrounded by defensive walls. The walls are pierced by ancient gates, notably the 14th century Mudejar style Puerta del Sol, and the Roman gate at the end of the Alcantara Bridge.

The former mosque of Christo de la Luz, built in 999 AD
Old Toledo is like a living museum;a UNESCO world heritage site, it is the city that brings together, like no other, the three historic strands of Spanish art and culture – the Christian heritage, the Moorish heritage, and the Jewish heritage. After the Alcantara bridge, the oldest monument in Toledo is the tiny church of Christo de la Luz is the only survivor of the ten mosques that stood in Toledo before the Reconquest. Built in the year 999 AD, it is a beautiful intimate tribute to the architectural and decoratives skills of mediaeval Islam. The tenth-century interior survives, as part of a slightly larger mediaeval building in the Mudejar style - the classically Moorish style that was adopted by many Spanish Christian architects and builders in the centuries following the Reconquest.

Toledo has several Mudejar monuments, the finest of which is the 14th century church of San Tomé: but the finely decorated Mudejar tower is not San Tomé's chief claim to fame. The church is best known for housing what is generally regarded as the finest work of art by El Greco, Toledo's most famous artist. The vast Burial of the Count of Orgaz - which is a remarkable group portrait of the important citizens of Toledo in the late 16th century - stands in the church for which it was originally commissioned in the year 1586.
There are other works by El Greco in several locations in Toledo, notably in the El Greco house and museum, a few hundred metres down from San Tomé. A bit further on is the Synagogue of Santa Maria la Blanca, another great mediaeval Mudejar monument, and a museum of the history of the Jewish community in Toledo.
The most visited historic monument in Toledo is the great Gothic cathedral on the crest of the hill, dating from the 15th century: it is reputedly the most interesting cathedral in Spain. Essentially Gothic in style, it is built on the site of an earlier Visigothic cathedral and then Moorish mosque. Inside, like most similar buildings in Spain, the cathedral contains a large decorated retable or altarpiece. Overall, there are in the cathedral and its chapels far too many points of interest to list here: however it is worth noting that Toledo cathedral's Sacristy is one of the great art galleries of Spain, with works by Titian, El Greco, Velasquez, Goya, Van Dyck and others, as well as a remarkable collection of artefacts.

Old Cuenca, and the cathedral, under falling snow.
While Toledo - less than an hour from Madrid - is firmly on the tourist trail, the same can not be said of Castile la Mancha's other gem, the small city of Cuenca. Foreign tourists are relatively scarce in this delightful old city that is like no other in Spain, or indeed in Europe. Until recently Cuenca was well off the beaten track; but today it is connected to Madrid by a new motorway and is on the Madrid-Valencia high-speed rail line.
While Toledo stands on the hot dry plains, Cuenca is a mountain city, located at 1000 metres on the edge of the Sierra de Cuenca, at the eastern edge of Castile la Mancha.
the city is most remarkable for its location, as it is built on a narrow neck of rock with virtually vertical cliffs on either side. In past centuries, lack of space in the city led to citizens looking for original ways to get more out of less, and to build houses cantilevered out over the abyss. The famous "hanging houses of Cuenca" are not unique, but are a unique architectural feature among Spanish cities.
Cuenca also boasts a remarkable footbridge, spanning  the chasm on the south side of the old city. The Puente de San Pablo was originally built in the 16th century to connect the old city to the San Pablo monastery on the other side of the gorge. The present bridge was built in 1902.
Cuenca's cathedral is one of the oldest in Spain. Behind the unusual facade, rebuilt in 1902, can be found what is essentially an Anglo-Norman gothic cathedral. The style was inspired by the wife of King Alfonso VIII of Castile, who was Eleanor of England, daughter of Henry II.
The hills - or mountains - around Cuenca are largely forested, and are excellent hiking country. They contain a number of interesting monuments and locations, the best known of which is the Ciudad Encantada, a remarkable area or karstic rock formations of the strangest and most unlikely shapes.  Another less spectacular and less visited, but very interesting karstic area is the  Palancares y Tierra Muerta natural monument, a geological and wildlife area open in summer and at weekends.


Other sites worth visiting

In the southwest of Cuenca province, a place worth visiting is the Castle at Belmonte. Familiar to movie buffs as the castle used in the 1961 blockbuster El Cid, Belmonte is today remarkably intact and, from the outside, appears fairly much as it would have done at the start of the sixteenth century, shortly after it was built. The castle was extensively renovated in the nineteenth century.
In the far north of Castilla la Mancha, the small town of Siguenza is an delightful place to visit. Though its population is just about 5000, it boasts an impressive mediaeval fortress (now a **** parador hotel), and a fine gothic cathedral, with beautiful cloisters. From the 15th to the 19th centuries, Siguenza was the seat of a well-known university. Three kilometres north of Siguenza, one remarkable spot off the beaten track is the tiny village of Palazuelos, enclosed in the complete protection of its mediaeval walls. 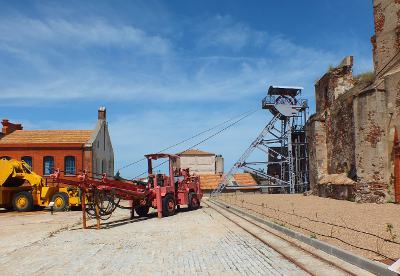 Part of the open-air mining museum at Almadén.

Right in the south of Castila la Mancha, a unique site that is really worth visiting is the museum and the mine at Almadén, a UNESCO world heritage site. Mercury was mined at Almaden from Roman times until 2003. Today the mine is no longer exploited, but former miners guide visitors on a 2½ hour underground trip. There are generally two visits per day, one in the morning, one in the afternoon; but given the limited capacity, it is highly recommended to book in advance directly with the mine. The museum, above ground, can be visited during normal visiting hours, and reservation is not needed.

For the independent traveller, a choice of hotels and hostales in Toledo, Cuenca and Ciudad Real and their surrounding areas.
► Select city & star rating
for a  broad choice of hotels and the best discounted online booking rates available.
These links will take you to Booking.com, Europe's leading online hotel booking portal

14th Century Puerta del Sol, one of the ancient city gates of Toledo

Where's where? See map of the Spanish regions

Getting to Castilla la Mancha:
By car via the southwest corner of France, and Madrid.

Fly to Castile: There are plenty of scheduled flights to Madrid,  and from there on AVE high-speed trains to Toledo, Cuenca and Ciudad Real

The centre of old Toledo, with the Cathedral

Photos and text copyright About-Spain.net
Except  photo top of page by Wikilmages