Historically off the beaten track,  Extramadura is a treasure trove of historic places and natural environment 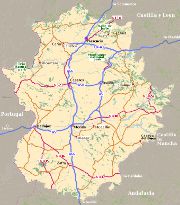 Click  map for a full-size version
Lying in southwestern Spain, Extremadura is bordered to the north and east by Castile and Leon, to the south by Andalucia, and to the west by Portugal.
In Roman times, Extremadura was an important part of the Iberian peninsula. it lay astride the Via Delapidata, a major trade route for the commerce of tin and copper, that crossed Roman Iberia from the north coast to the south. Renamed Via de la Plata or Ruta de la Plata in mediaeval times, the route is today both a long-distance hiking route, and a vaguely defined tourist trail, running through Extremadura from north to south. The region is also crossed by the main route leading between Madrid and Lisbon.
With a population density of under 30 inhabitants per sq. km, Extremadura is one of the least populated areas of Spain - meaning that it has plenty of empty spaces and open countryside. It is also the poorest region in Spain, in terms of per capita GDP - a historic reality that is paradoxically one of the main reasons for the wealth of its historic heritage and natural environment today.

Mérida - the Roman theatre
Merida, once the capital of the Roman province of Lusitania, is Extremadura's capital city, and one of its UNESCO listed world heritage sites. In the south of the region, Merida lies at the point where the Ruta de la Plata crosses the river Guadiana, and its Roman bridge over the Guadiana is the longest Roman bridge in the world. Merida has Spain's finest ensemble of Roman remains, and as well as the Puente Romano, it has a magnificent Roman theatre, an amphitheatre, a Roman stadium, and the remains of three Roman aqueducts. Apart from Merida, Extremadura has a number of other impressive Roman remains, the most important of which are the bridge over the Tagus at Alcantara, a second Roman bridge over the Tagus, and a fine part of the original Roman walls in the small town of Coria.

Plaza Mayor in Caceres - just outside the old city walls on the left
In Renaissance times, Caceres was home to prosperous families, who built magnificent "palaces" within the walls of the old fortifications dating from Arab times. Then time passed Caceres by, and little happened to change the Renaissance "ciudad monumental". Now a world heritage site, old Caceres is a traffic-free maze of small streets, with squares bordered by magnificent Renaissance town houses, with family coats of arms carved in stone above their doors. Some of these are now small free museums, including the Fundación Mercedes Calles-Carlos Ballestero, which puts on a top-class exhibition each summer. Another former palace is now the free Caceres museum, built over an Aljibe, the finest surviving Moorish water cistern in Spain. The museum contains a fine collection of  mediaeval, Roman and prehistoric artefacts, and an art gallery with works by Picasso, Miro and El Greco.  But the great experiences of old Caceres are just to wander through the quiet old streets and squares, look or walk into many other fine Renaissance courtyards in this unique city centre, and to climb to the top of the tower of the cathedral and admire the panoramic view.

Platresque doorway to Plasencia cathedral
Fifty kilometres north of Caceres lies Plasencia, another historic city standing within its ancient walls. It is very different from Caceres, as the old city has become the modern city, its narrow streets lined with shops and restaurants. The city boasts a fine Plaza Mayor, and also, like Caceres, some impressive old residences. It also has two conjoined cathedrals - the result of an uncompleted rebuilding project from the late Renaissance. Though under the same roof, the two half-cathedrals are separate, and are a unique and surprising mixture of architectural styles, from the Romanesque to the Platresque. Close by, the city's Parador, housed in a former monastery, is worth a visit.

Trujillo's main square on a warm May evening
No visit to Extremadura is complete without a visit to Trujillo, a small town in the east of the region. The old city,

Moorish gateway to the castle at Trujillo
standing on a rocky hump on the plains of Extremadura, was the birthplace of Francisco Pizzaro, the ruthless Conquistador who claimed Peru and other parts of South America for the Spanish throne. Pizarro became fabulously rich, and his family palace on the main square of Trujillo bears withess to this. With its arcades and fine houses, the main square itself is one of the most attractive in Spain. At the top of the mound, Trujillo has a fine  fortress, including Moorish parts dating from the 9th century. From the ramparts there is a tremendous view out over the plains to the hills of the Monfragüe national park beyond. The plains north of Trujillo are an almost deserted area, occupied by vast estates where Iberian pigs and bulls graze in semi liberty under millions of encinas, or evergreen oaks. The area is also rich in wildlife and popular with ornithologists who come to see - among other rare birds - the flocks of great bustards - the largest bird in Europe, which survives in these wide open spaces.

Other places, other sites

The royal monastery at Guadalupe
Extremadura has two renowned historic monasteries, firstly - 50 km due east of Trujillo – the royal monastery of Santa María de Guadalupe, a remarkable ensemble dating from the 14th to 17th centuries. Christopher Columbus came to this isolated spot in the hills to thank God after discovering the New World, and the virgin of Guadalupe is highly revered in Latin America. The monastic buildings include the 14th-15th century Templo Mayor and fine Mudejar cloisters; there is also a museum with works by great Spanish masters including Zurbaran, El Greco and Goya.
On a smaller scale, the monastery of Yuste, on the southern slopes of the Sierra de Gredos, is a much smaller affair, a haven of peace and quiet where the great Hapsburg emperor Charles V - the contemporary of Henry VIII of England and François 1° of France - gave up the courts of Spain and the Netherlands, and came to live out the last two years of his life. The monastery lies close to the attractive small towns of the Vera , an agricultural area watered by streams from the mountains behind, and reputedly the home of the finest paprika in Spain.
Not far from Yuste, running northwest from Plasencia, is the Valle de Jerte, a popular place to visit in the Spring and early summer; the valley is the cherry capital of Spain, with millions of cherry trees planted on the slopes of the hills to either side.
For bird-watchers, the most interesting area of Extremadura is the Monfragüe national park, now classed as a Biosphere reserve; the park, north of Trujillo, includes a rocky and hilly area along part of the valley of the Tagus, and is renowned for its eagles and vultures.

The remparts of Galisteo, and one of the town gates
Extremadura has many other interesting and even remarkable sites; among these is the small

The virgin of Guadalupe - revered throughout Latin America

walled hilltop town of Galisteo, about 25 km west of Plasencia. The town is completely surrounded by its fortifications, originally built by the Moors in the 13th century, before the Reconquest of Spain. Traffic can only enter the town by using one of the three historic city gates - but not much traffic does so, as this is just a sleepy country town, a part of deepest Spain that has changed very little over the past few centuries. There is nothing to do in Galisteo, nothing but walk round the quiet streets of the old town, visit the Roman bridge just outside it, and then wander along the battlements with their views over the rooftops and the countryside beyond; but if savouring the historic heritage of Spain is on your tourist agenda, there can be few places better than Galisteo in which to do so.
A short drive from Caceres, two other small towns deserve mention: to the south lies Montanchez, a hill town with a splendid castle, once a moorish stronghold, from whose ramparts there are spectacular views out over the plains to the north and the west. Northwest of Caceres is the small and sleepy town of Garovillas, with a remarkable colonnaded sixteenth-century town square; it is said that the plaza at Garovillas resembles countless similar town squares in small towns all over Latin America. And given that Extremadurans in the past formed a significant proportion of the Spaniards who settled in Latin America, there is probably some truth in this.
In the south of Extremadura, two small towns are well worth the visit. Half an hour east of Mérida, the town of Medellin, which was in 1485 the birthplace of the conquistador Hernán Cortés, lies at the foot of an impressive 14th century castle, defended by a double set of walls. The town also has a fine 17th century bridge over the river Guadiana, and - below the castle - a Roman theatre which has recently been excavated. Finally, in the far south of Extremadura, not far from the border with Andalucia, lies Zafra, a "white town" of Moorish origin, with a lovely arcaded Grand Plaza and a fine 15th century Alcázar which is now a Parador hotel. The Candelaria church, one of serveral interesting churches in Zafra, has a retable by Zurbaran.


Continue to...
►  Moorish Spain   -   Roman Spain  -  Castles in Spain
Other pages of interest :   Travel in Spain  -  Food and eating in Spain
► You may also like : Undiscovered France

For the independent traveller, a choice of hotels and hostales in Mérida, Caceres and Plasencia and their surrounding areas.
► Select city & star rating
for a  broad choice of hotels and the best discounted online booking rates available. These links will take you to Booking.com, Europe's leading online hotel booking portal

Storks are everywhere during the warm seasons