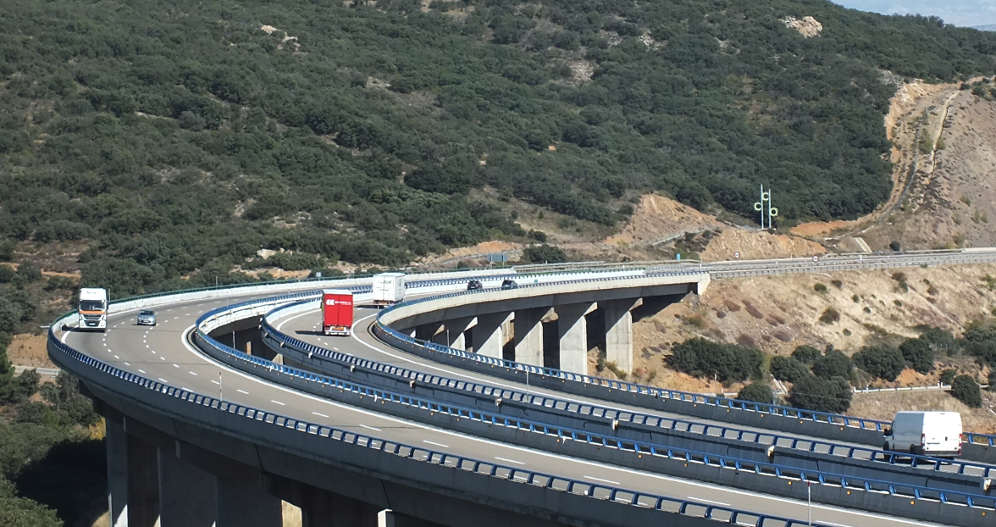 Rules of the road, motorways, tolls and other roads
About-Spain.net - the alternative guide to Spain

► ► Things you must have with you when driving in Spain
All foreign vehicles must have or carry the following items:
And note that.....
► Low cost car hire in Spain: click here
Best rates on hotels in Spain
Booking.com offers unbeatable online rates for hotels. Check out the following areas :

About-Spain.net is partnered with Europe's leading hotel booking portal, Booking.com, to bring you the best online prices
A generation or so ago, travelling round Spain was a time-consuming business; while the main roads radiating out from Madrid - numbered in Roman numerals from N I to N VI, were well surfaced, they were both dangerous and cluttered with slow-moving lorries. Among the dangers was an alarming feature of Spanish lorries, which had two left-side indicators at the rear - an amber one to indicate that they were pulling out or turning left, and a green one with an arrow, to tell a vehicle behind that it was supposedly safe to overtake...  It was your life in their hands.....
All that is history, and today Spain has perhaps the best domestic transport infrastructure of any country in Europe... and thanks to Europe. Since Spain joined the European Union, it has benefited from major  development funds to help transform its isolated and impoverished regions into part of the modern Europe.
Spain today is a country where beautifully built and surfaced roads criss-cross the land, reaching into some of its deepest corners. And the greatest joy is that very often, other than in the densely populated areas round Madrid and on the coast, there is little or no traffic on them. 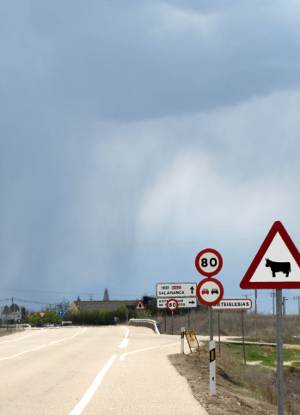 Furthermore it is possible to drive "off the beaten track" even between cities. Over the last half century, many main Spanish roads have been upgraded not just once, but twice or three times. And unlike in more populated countries, where upgrading means improving the existing road, the Spanish solution has often just been to build a new road near the old one. Consequently, on some routes, there are actually three parallel roads, the historic route, the post-Franco new road, and the more recent "autovia" divided highway. Where - as in most cases - the autovia is free, that leaves the old main road as empty as the most minor of minor cross country roads. Just occasionally, old main roads have been downgraded and /or equipped, as in France, with speed bumps and other devices - notably at the entrance to small towns; but generally speaking this is not the case.
On cross-country routes, those that are not part of the national highway network designated as "N" roads, traffic in most parts of Spain is  very light.  The majority of minor roads, those linking villages and small towns, are very well built and modernised, even when they serve no more than a few hundred vehicles a day. And signposting on Spanish roads is generally excellent.

Motorways in Spain come into two categores; the busy to very busy ones - often toll roads - most of them radiating from Madrid, and along the Mediterranean coast: and the others, most of them carrying only light traffic. Nearly all of these are free.
Generally speaking - though there are exceptions - Spain's toll motorways - known officially as Autopistas - are designated by the letters AP, as in AP8. Spain's free motorways, usually known as Autovias, are generally designated by the letter A, as in A66.
Around Madrid, the system is different, and complex. Madrid is a maze of motorways, with in addition to the A motorways M motorways (for Madrid) and R motorways (for Radial). Motorways M30, M40, M45 and M50 are the main orbital routes round Madrid. M50, the outermost, runs 80% of the way round Madrid, and connects all the main national A motorways, from A1 to A6. The missing section is the northwest, from the A1 to the A6 - for which the A40 should be used. Orbital M motorways are free, the radial R motorways are toll roads.
For an overview of Spain's motorways, see Spanish motorway map
Click here for a no-tolls route from Bayonne (France) to the South of Spain. Travelling via Bayonne (sw France) rather than by Perpignan and Barcelona  is actually shorter for most destinations south of Valencia.

What distinguishes autovias from autopistas ? Frankly, very little.... except for the tolls on some of the Autopistas, those with a number starting AP. Otherwise there is very little difference.
Most but not all Autovias have numbers starting with A, for instance the A3 which runs from Madrid to Valencia. But some, those built by the regions, not by the Spanish national highways agency, are numbered differently. Catalonia's C25, for instance (photo top of page) , linking Girona and Lleida, is as good a motorway as any, even if many maps do not mark it as such.
Where toll autopistas and non-toll autovias offer alternative routes between two points, trucks usually take the free autovia leaving the autopista for those in a hurry and those happy to pay the tolls. But for itineraries where there is no autopista, HGV (truck) traffic uses the autovias when available.  However, it's worth noting that on most autovias, except those on the Mediterranean coast and close to Madrid, truck traffic is light to very light, compared to motorways in the UK, Germany or the Netherlands.
Autovias tend not to have many dedicated service areas. Instead, they have plenty of exits with off-highway garages or service stations, restaurants and sometimes hotels or hostals. These are clearly announced in advance of the exit.

In Spain as a whole, tolls must be paid on about 20% of the motorway network; the rest is free. However, there are big variations by region, and in Catalonia over half the state motorway network is composed of toll routes.
Spanish toll motorways are relatively expensive: for instance, tolls on the Mediterranean motorway between the French border at Le Perthus and Valencia - a distance of 500 km. mostly on the AP7 - cost almost 45 €uros for a car.

Info updated 2019. It is possible to avoid the tolls by taking the free parallel A7 motorway, where it exists, and the old N340 national route, but if you decide to completely avoid the AP7 toll motorway, the saving may be offset by hassle and slow traffic, specially on the single carriageway N340 in summer. There are plenty of trucks using this route at all times of the year, so unless you are driving a slow-moving HGV or truck, trying to avoid all tolls is pretty pointless.
Far better use the toll motorway where it represents a major saving in time and hassle, and leave it where there is less to lose, by following our recommended toll-saving route.

Recommended route avoiding most but not all tolls :
Starting from Perpignan in France, take the French A9 toll motorway until you reach Spain (the former N9, now D900, is just too much hassle south of Perpignan). Once in Spain, leave the motorway and take the old NII as far as near Vidreres, south of Girona. Join AP7 at exit 9, and stay on it all round Barcelona (where it's partly free anyway) until exit 32 before Tarragona. Here join  N340 which turns into the free A7 motorway after about 4 km. Follow the A7 for 60 km, after which it becomes the N340 again. Turn off N340 at kilometre-marker 1114, for Ametlla de Mar. Turn towards the sea, then after 600 metres rejoin the toll AP7 at exit 39 as far as exit 44 for Torreblanca. At the exit roundabout follow CV13 / CV10, signposted "Aeroporto de Castello" among  other things . After 9 km of high-quality single-carriageway road, the CV 13 becomes an autovia (motorway) as it passes Castello airport. You are then on free motorway to beyond Valencia. The CV13 becomes the CV10, which used to be the A7 and may be marked as such on some maps. It then merges with the AP7 where the latter becomes toll-free.
Toll cost using this route: 13.30 €, compared to over 50 € making full use of the AP7 (2018 rates - car.)  The tolls on this route are well worth paying given the time they save and stressful driving conditions they avoid.
It's best to avoid the single-carriageway N340 between Ametlla and Torreblanca as it can get quite congested and slow moving

On the other hand, traffic moving southwest from the French border on the Atlantic coast at Irun (near Biarritz) can both avoid most of the tolls and take a shorter route between San Sebastian and Vitoria, by using the N1 and A1 autovia, rather than the AP8 and AP1 autopistas.

Immediately after entering Spain, it makes little sense to avoid the couple of Euros of tolls on the 20 or so km. between the border and San Sebastian. The AP1 / AP8 round San Sebastian is free anyway. Leave it however at exit 24, onto the N1 / A1 (dual carriageway - divided highway), following signs for Tolosa and Vitoria. Continue past Vitoria as far as Miranda de Ebro, where the A1 becomes the toll AP1. Do not take the AP1, but continue on the old N1 as far as Burgos. It's an easy road. Just before Burgos, join the A1 again, following signs for A1 - Madrid. Give Madrid a wide berth, using the M50 outer orbital route to the east, following signs for the M50, A2 and A3 (take this for the coast between Valencia and Cartagena)  until signs for the "A4 Cordoba" are shown (not the R4 Cordoba, which is a toll road).

The same goes for traffic heading for Saragossa and Madrid, from Barcelona. Leave the AP7 (which is free round Barcelona) at exit 26, and follow the free A2 as far as Fraga, after Lleida.

The best advice is to use a satnav or a good post 2010 map - which should remain fairly up-to-date until at least 2020, since on the one hand Spain's strategic motorway-building plan is now largely complete, and on the other hand the economic crisis has put paid to any more projects for the time being.
On sections of intercity toll motorway, the normal system is to take a ticket when you enter the toll section, and pay when you leave. On shorter sections of toll motorway, toll booths come at strategic points on the motorway, and there is a small fixed toll for using the section. Payment can be made in cash in  €uros, or by credit card. Credit card lanes at toll points are shown by a credit card logo, and sometimes the word "tarjetas".

The normal speed limits are as follows:
Speed traps:  There are now plenty of speed traps, or radars, on main roads in Spain, and police can and do issue on-the-spot fines. Advance warning of speed traps tends to be given, and the speed cameras are sometimes painted in fluorescent yellow, with the speed limit painted on them; but this is not always the case. Speed cameras are uncommon on minor roads in Spain. 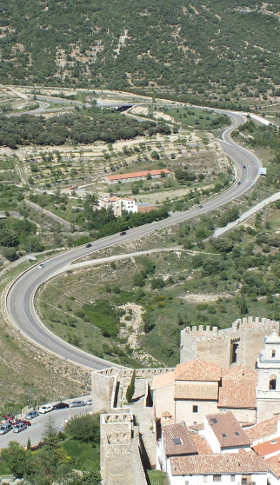 Driving in Britain - for visitors. coping with driving on the left and tips for driving in the UK

Driving in Quebec - rules of the road in French-speaking Canada

Driving in California - and general info for driving in the USA

More places to stay
in Spain: