The beaches are just the edge of Spain

Seasides, mountains, dramatic landscapes, fine cities and a fabulous heritage – Spain has them all

As Europe's second tourist destination, Spain has plenty to offer; and it's not all seaside. Granted, most tourists visiting Spain come for the sea, the sand and the sunshine; but Spain is so much more than its beaches. The beaches are just the edge of Spain, the dust-jackets of the book that is Spain. This website, About-Spain.net, is all about opening the book and reading about what's inside – the fabulous natural environments, the historic heritage, the wide open spaces, the cities, the villages, the castles and so much more.  But since Spain's coast is by far its major attraction, we'll start with this

For the vast majority of visitors, Spain is synonymous with the "Costas"; from the Costa Brava in the north to the Costa del Sol in the south, Spain's Mediterranean coast is 1200 kilometres in length, and quite a bit more if you count the actual kilometres of shoreline, with its headlands, bays and inlets, as well as its long sandy beaches. Driving the full length of this coast takes at least two days using the motorways, considerably more if using small roads and stopping to discover the best sights.
In addition, Continental Spain has two sections of Atlantic coastline, one in the southwest, the other along Spain's northern edge. These areas are both different in character and opportunities to the Mediterranean coast, and this is notably the case for the northwestern coast of Spain, in the regions of Asturias  and Galicia. Known as "Green Spain", the northern coastal fringe is an area where the mountains come down to the sea, offering a range of alternatives for holidaymakers looking for something more than just a sunny beach to lie on.
► Follow this link for more information on the coasts of Spain.

For those interested in a short city break in Spain, with no driving, there are three, possibly four, destinations to consider. The most obvious of these is Barcelona, now one of the most popular cities in Europe for a short city break. The capital of Catalonia is a vibrant city that reinvented itself for the Olympic games staged there in 1992, and has never looked back. It is a vibrant city, with a great tradition for cafés and restaurants, plenty to see and do, and the added attraction of Mediterranean beaches. The most visited attraction in Barcelona is  the iconic Sagrada Familia cathedral, designed in 1884 by the visionary architect Antoni Gaudi, and still being built to Gaudi's designs. Other top attractions in Barcelona include Gaudi's unique "La Pedrera" apartment block, and two art galleries, the Miro Museum and the Picasso Museum. For something less cultural, Barcelona's IMAX cinema and the Barcelona FC football museum are hot attractions.
After Barcelona, the next best bet for a short city break is Madrid. Indeed, for art-lovers, Madrid must come top of the list, on account of its several world-class art galleries, most notable of which are the Prado - Spain's national gallery -  the Reina Sophia museum, a museum of modern art housing among other great works Picasso's Guernica and his Woman in blue, as well as works by Dali, Miro and other major twentieth-century artists. Madrid also offers all the attractions of a historic capital city, its palaces, its historic monuments and cathedrals, and the inevitable tourism activities to go with them - open-topped tour buses, guides and plenty of shopping opportunities. 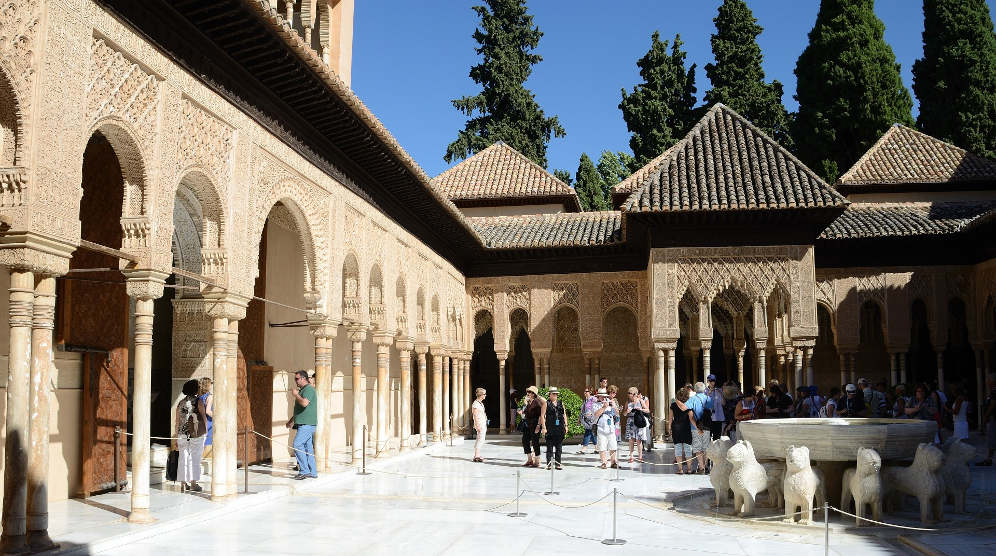 The courtyard of the Lions, in the Alhambra, Granada.
Two other cities that definitely merit a visit are Bilbao in the north and Granada in the south. Bilbao is notably home the Guggenheim museum for Europe; opened in 1997, and - like its New York counterpart - stunning in its architectural originality, Bilbao's Guggenheim is a treasure trove of modern art. More classical is the Museo de Bellas Artes, an art gallery with a good but not too extensive collection of works by a range of major Spanish and European artists.
As for Granada, just to mention the Alhambra says it all. The most magificent Islamic palace in the world is in Spain, an architectural gem, with its intricate stonework and plaster, its fountains, and its gardens scented with jasmin and orange blossom. But don't just turn up at the Alhambra and expect to be let in; tickets must be bought in advance, on line of from the tourist office. Other sights of Granada inculde the Albaycin quarter, a classic old Andalusian "white village" overlooking the Alhambra, as well as the cathedral and other moorish monuments.One other fascinating place to visit is the old medina, or market, close to the cathedral, and full of tiny stalls selling traditional Andalusian and Moroccan handicrafts. It has all the feel of a little bit of the Arab culture that once characterised this moth southern part of continental Europe.
► Click for more on Granada

For information on Spain's other cities, click here for undiscovered Spain

A  sizeable part of Spain lies at an altitude of over 1000 metres, and the mountain ranges that rise from this upland are even higher; consequently, there are opportunities for winter sports in several parts of Spain. The most popular Spanish ski resorts are in the Pyrenees, near the French border. There are a number of ski resorts in Catalonia and Aragon, with slopes at over 2000 metres. The Spanish Pyrenees are quite a sunny area, offering good skiing conditions in the winter months.
Close to Madrid, the most popular ski resort is the Puerto de Navacerrada, in the Sierra Guadarrama, about 50 km from the capital. There is also downhill and nordic skiing in the Sierra de Bejar, two hours west of Madrid.
The highest altitude skiing in Spain is to be had in the Sierra Nevada, a short distance from Granada. The main resort here is Pradollano, with 100 km of runs. The resort lies at 2100 metres, and slopes go up to 3300 metres; on account of its elevation, skiing here is often possible from November to early May.
Finally, near the north coast of Spain, there are two medium sized ski areas in the Picos de Europa range, west of Santander, one at Alto Campoo in Cantabria, the other at Fuentes de Invierno, in Asturias. Plans to build a third ski resort to the south of the range have met with fierce opposition from environmental groups, keen to protect what is still one of the wildest and most natural areas of high mountain in western Europe.

Photo top of page - Spain's beaches are just the edge. Look inland, and there's so much to discover

Spain has a unique heritage with its roots in Christian, Islamic and Jewish culture
Areas and regions
of Spain 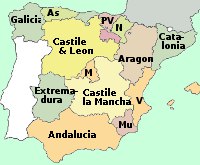 
As in any country, tourists in Spain need to be aware that there are scam artists out to fleece unsuspecting visitors. While Spain may actually be safer than many destinations, you can check out some of the main tourist scams by visiting the Spain page on travelscams.org


Photos on this page copyright © About-Spain.net except photo of the Alhambra, by Jim Gordon - licence creative commons