Mérida, Extremadura  - the Temple of Diana.
Hispania was an important part of the Roman Empire. The Romans were present in Hispania for over six centuries, during which time they established the Iberian peninsula as a major part of their Empire. Roman rule lasted until the fifth century, when Spain was taken over by the Visigoths as the Roman empire in the west went into decline. Spain was, for the Romans, an important source of metals and of wool, and thus a major player in the economy of the Roman empire. The Romans established towns and settlements throughout Hispania, and  significant Roman remains can be found in many different regions.
While sites such as the aqueduct at Segovia and the many Roman remains at Merida or Tarragona have been well-known for centuries, other sites are still only being brought to light in the twenty-first century. Though archeological excavations have been carried out for many years on the Roman villa at Noheda, near Cuenca, it is only recently that the full extent of the fine mosaics has been revealed. Near Palencia, the remains of the La Olmeda villa were not properly excavated until 1968; its fine late Roman mosaics have now been properly preserved and are on public view.

Detail of the exquisite charioteer mosaic, Museum of antiquity, Mérida

Mérida - the Roman theatre
Continued below

Find places to stay near major Roman sites in Spain
About-Spain.net is partnered with Booking.com to bring you best rates on hotels. Check out the following areas :

Remains of the Roman city at at Ampurias

The Roman bridge over the Tagus at Alcántara, Extremadura.... still in use


Continue to...
►  Moorish Spain   -   Roman Spain  -  Castles in Spain
Other pages of interest :   Travel in Spain  -  Food and eating in Spain
► You may also like : Undiscovered France

Not surprisingly, given the fact that Roman civilisation lasted in Hispania for over six centuries, there are Roman remains all over Spain, many of them unreferenced in all but the most detailed and local tourist guides. One such location is Segobriga – the extensive remains of a Roman town with theatre, well-preserved amphitheatre, and vestiges of other Roman edifices, now in the middle of nowhere 100 km southeast of Madrid. Another is Coria, in Extremadura well off the tourist trail, which has some well preserved Roman city walls.
This page is an introduction to the best Roman sites in Spain, and also to some of those that are a lot less well-known 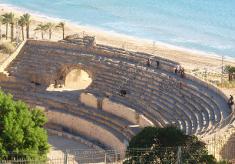